So having done initial investigations;

Bottom line, this isn’t a recommissioning, it’s a rebuild scenario. Time to take it apart!

Reading various manuals and accounts of restoring Elans, it’s useful to get the body and chassis split early on to make everything more accessible.

Started out removing the seats, as they’re on the big old list of things to take out to lighten the body before lifting off. 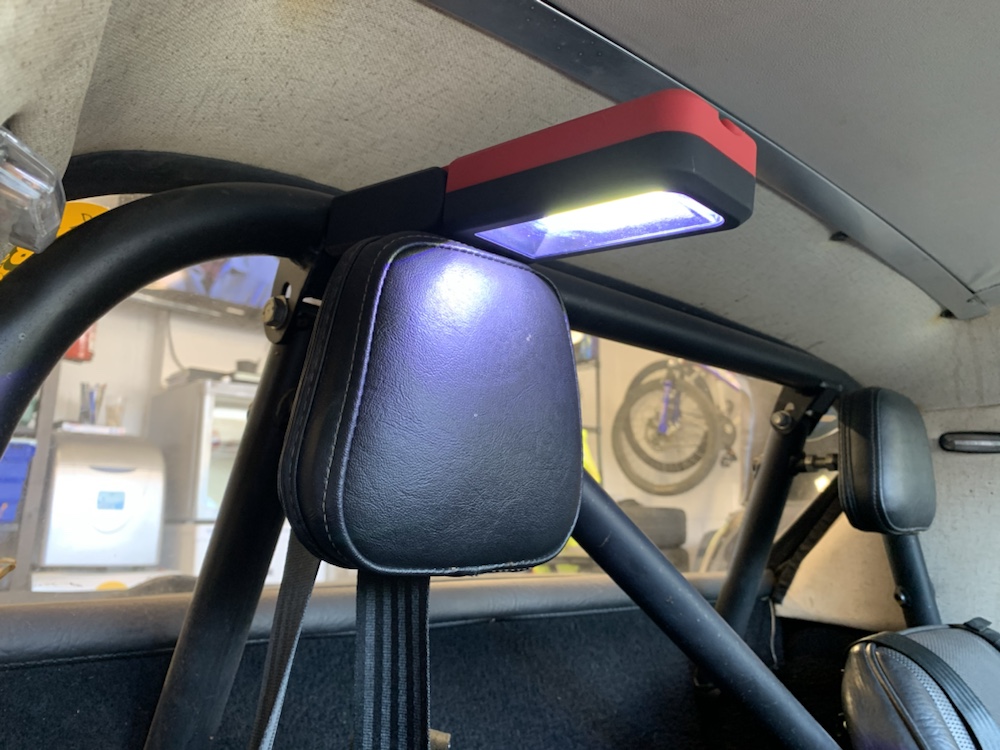 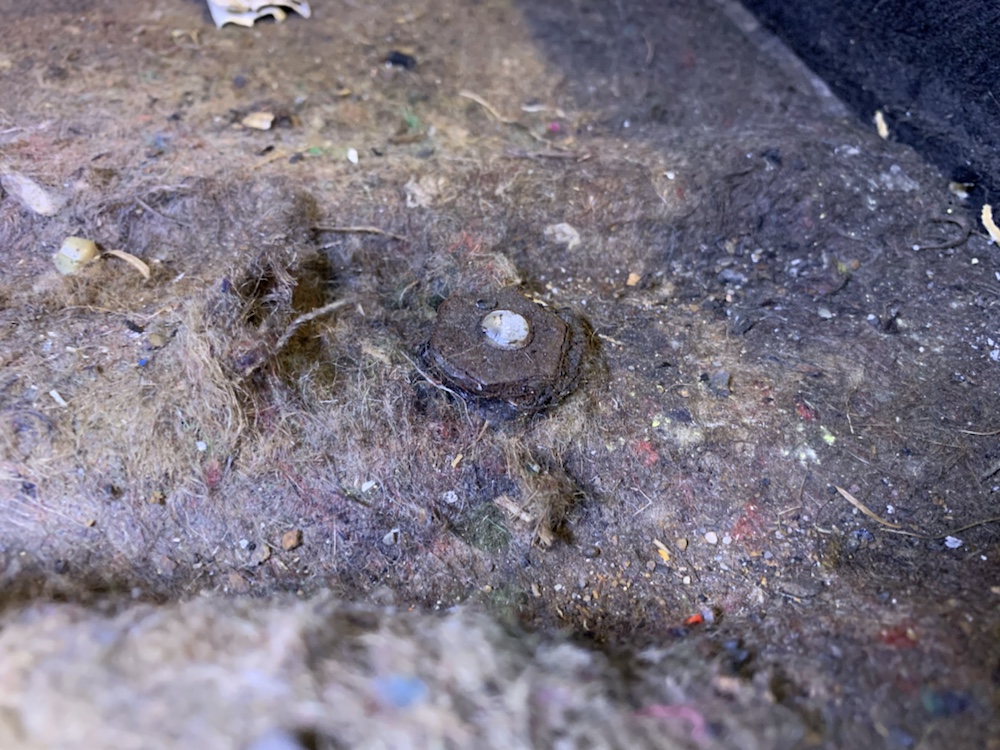 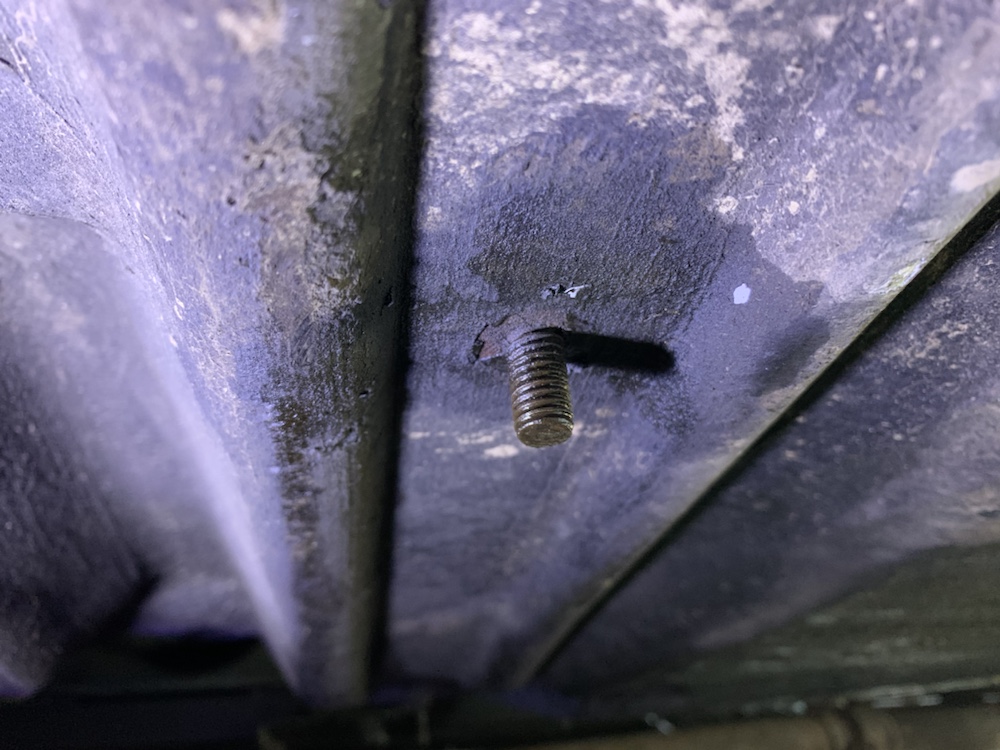 Not a great start, and for someone who believes in omens, actually, rather troubling!

Thankfully only one of the bolts holding the driver’s seat in sheared, the other and both passenger seat ones came free.

Not an uncommon issue with the bolts corroding and binding in to the bobbins. It is, however, a particular pain in the backside when you can’t use heat to try and free them up. The bobbins are bonded in to the fibreglass shell and heating them to any meaningful extent would cause damage. 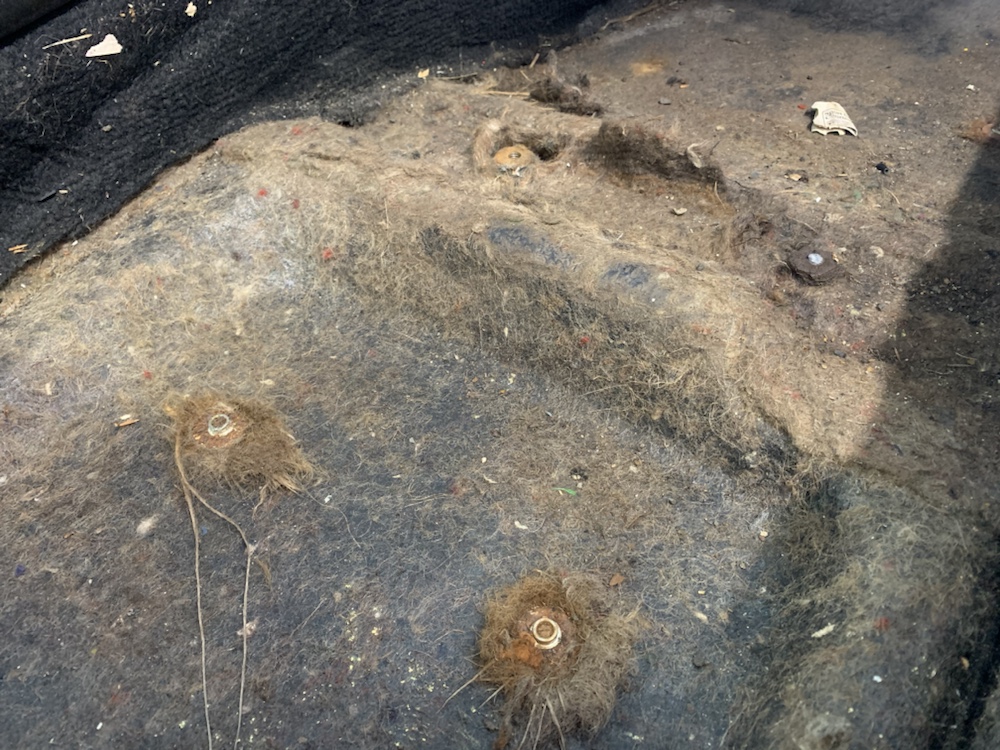 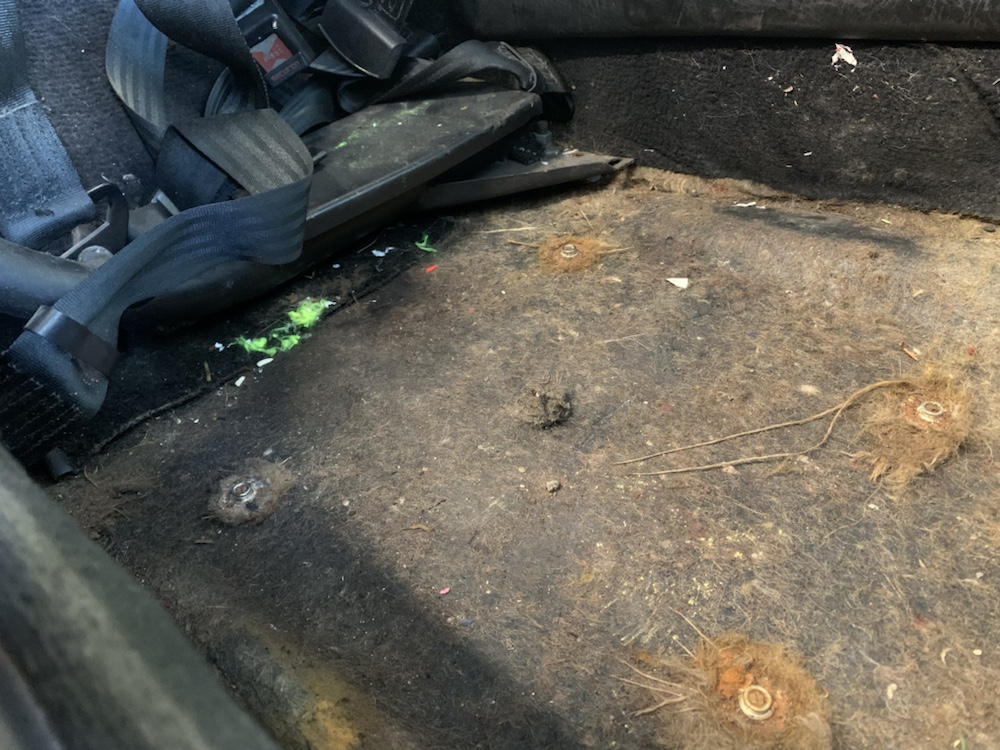 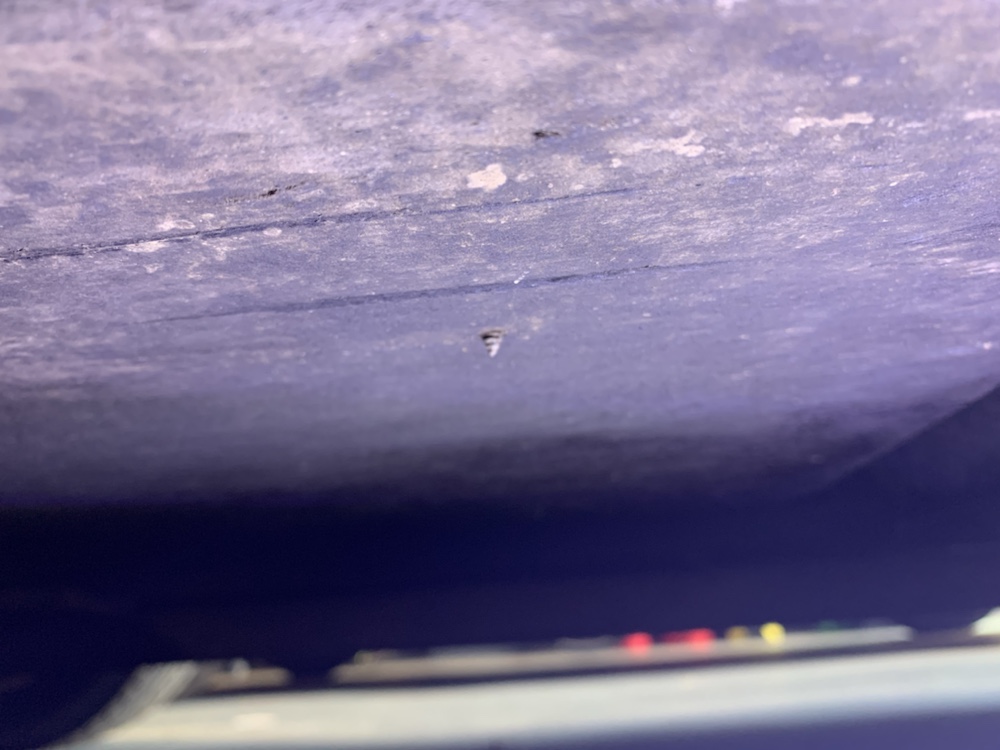 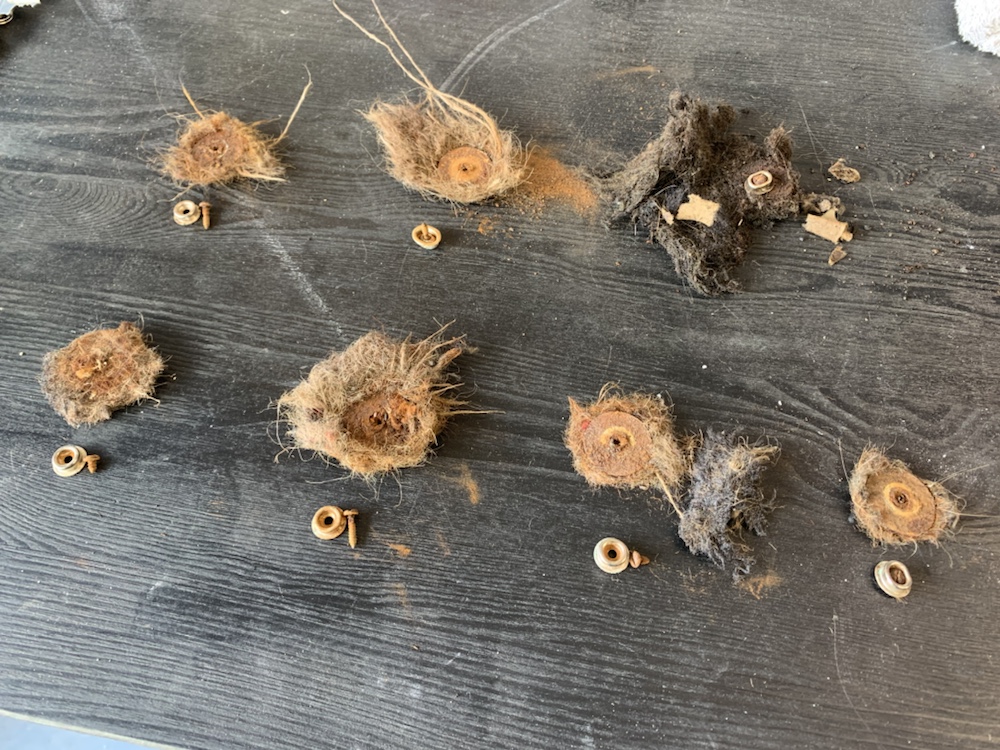 Top quality British build quality. Absolutely no consistency of screws used, some only a few millimetres, others long enough to poke right through the floor (although that only needs about ~8mm to be fair). 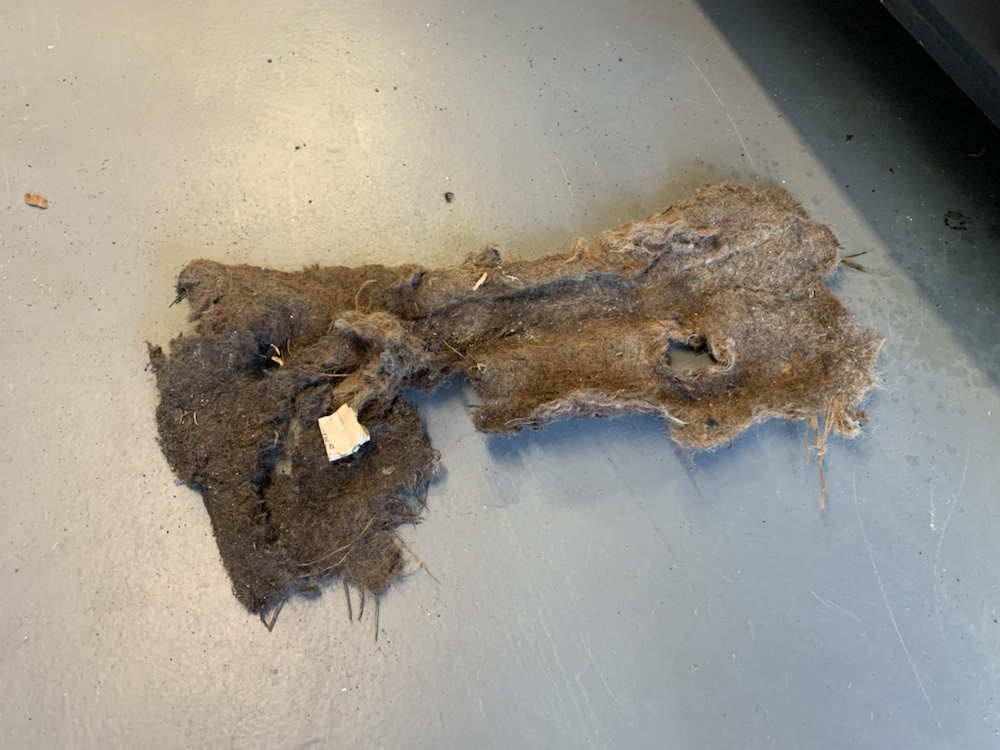 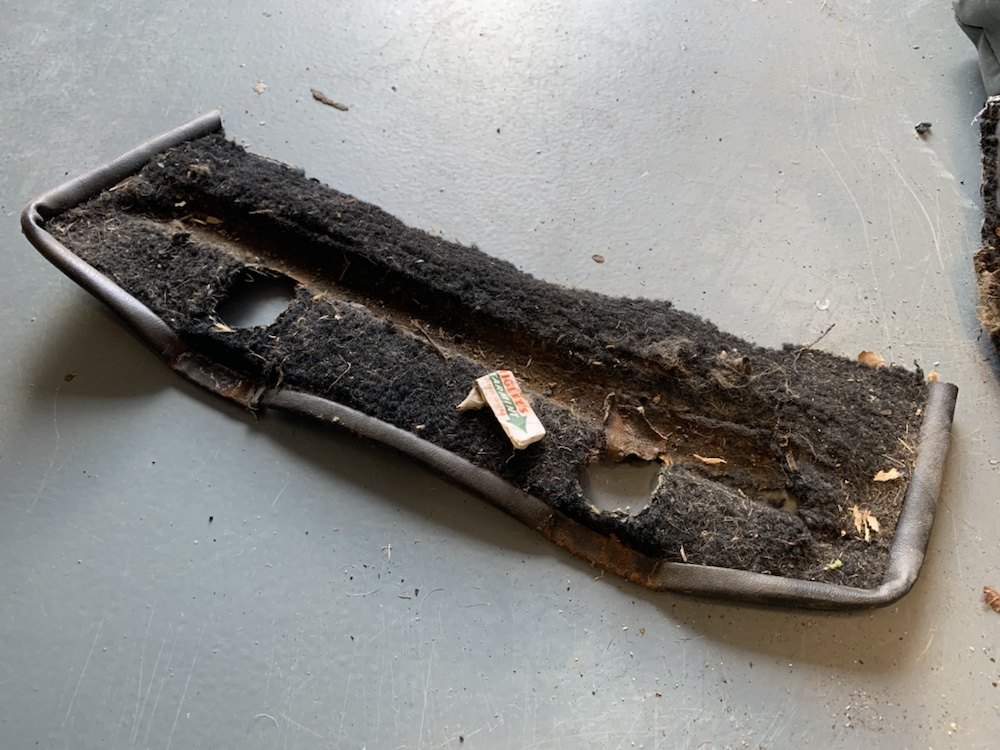 The remains of the carpet and underlay, plenty of the underlay remaining stuck to the floor. Good few hours wasted with a steam cleaner trying to scrape it out!

Next up, I wanted to get a look under the car and see how things were holding up. The jacking points on the Elan are actually not dissimilar to a normal steel monocoque car.

But… I just wasn’t that keen on using them. Whilst I have no reason to think our sills are worse for wear, it can be an issue with the steel reinforcement inside corroding. So I decided not to take the chance and to go with option B (Blue Peter). 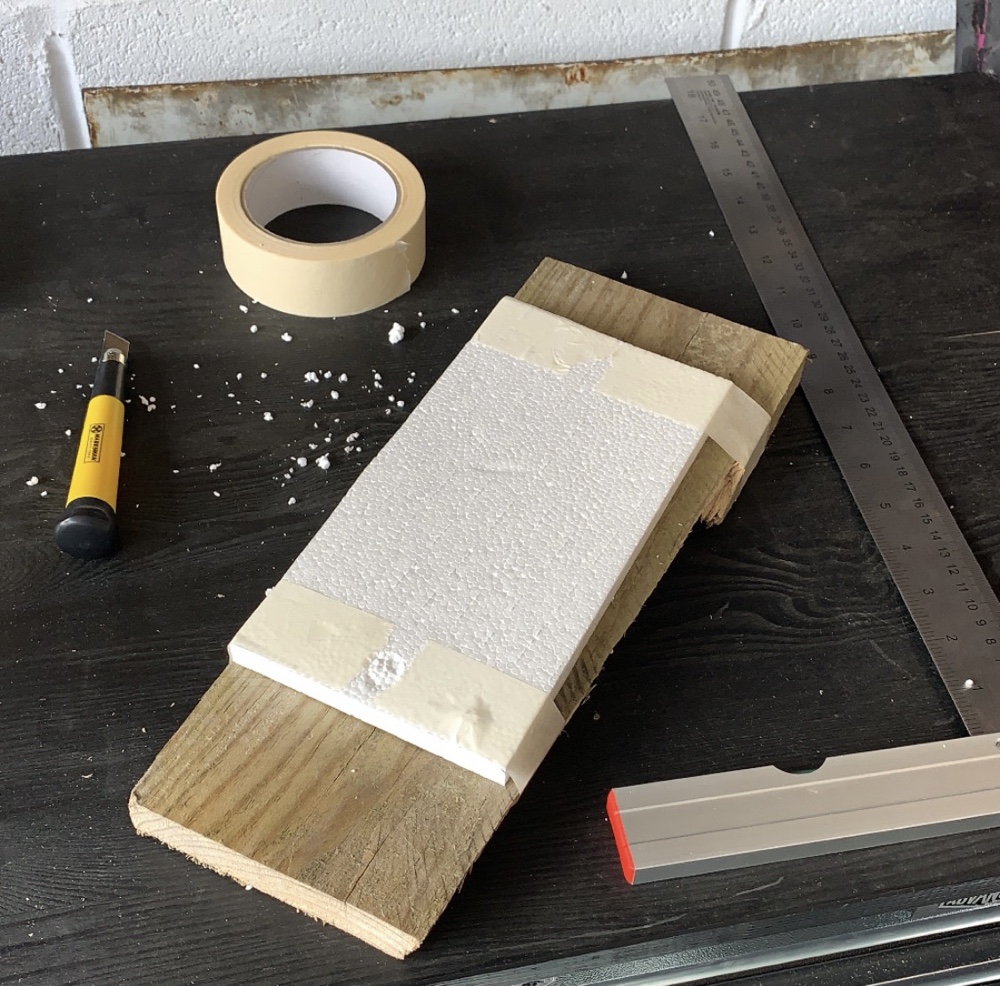 Using an off cut and a half inch sheet of polystyrene, I made a jacking pad for under the vacuum tube. This is a well known alternative jacking point and plenty strong, as that’s where the towing eye is located, but it makes sense to spread the load as much as possible. 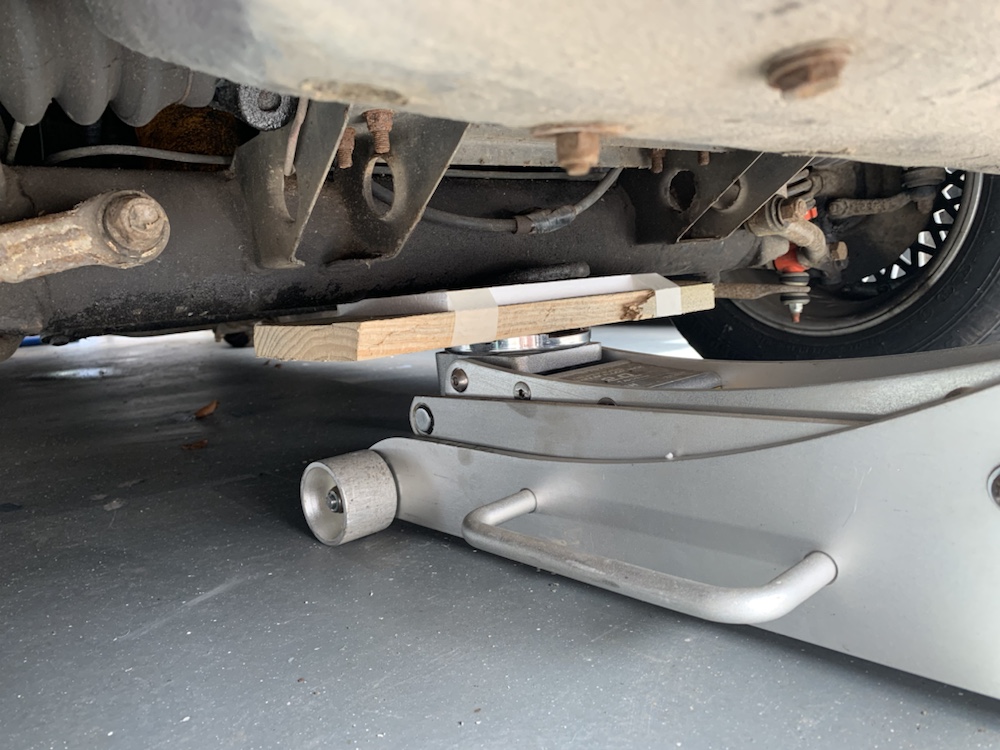 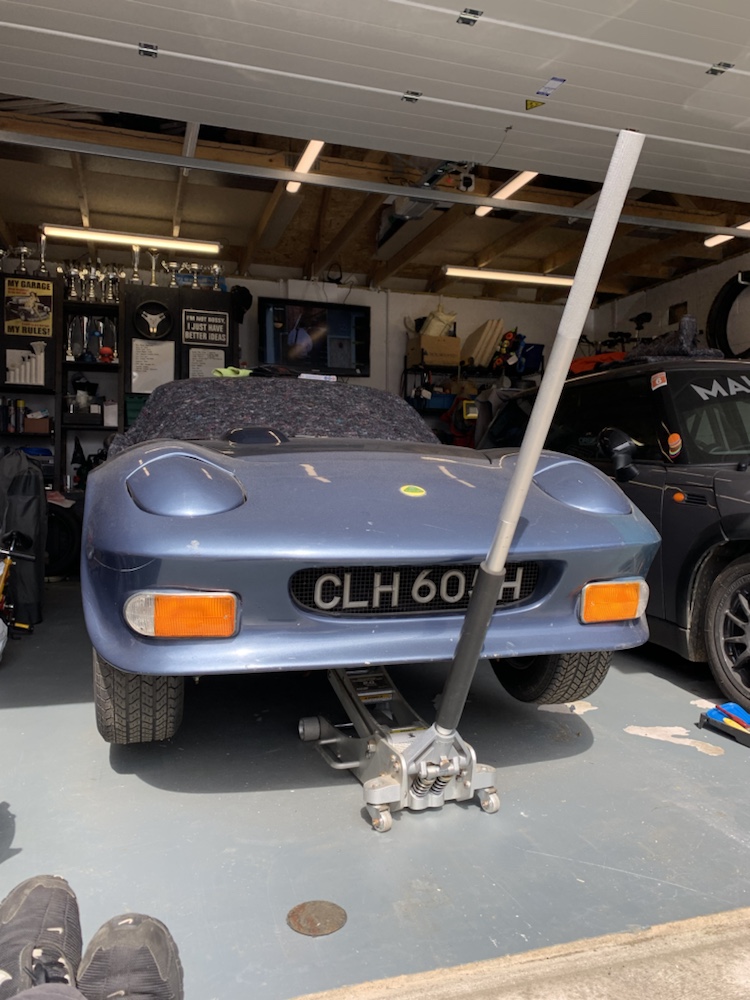 Obviously not going under the car without it being supported on axle stands, but was still able to get a decent look from the front and sides. 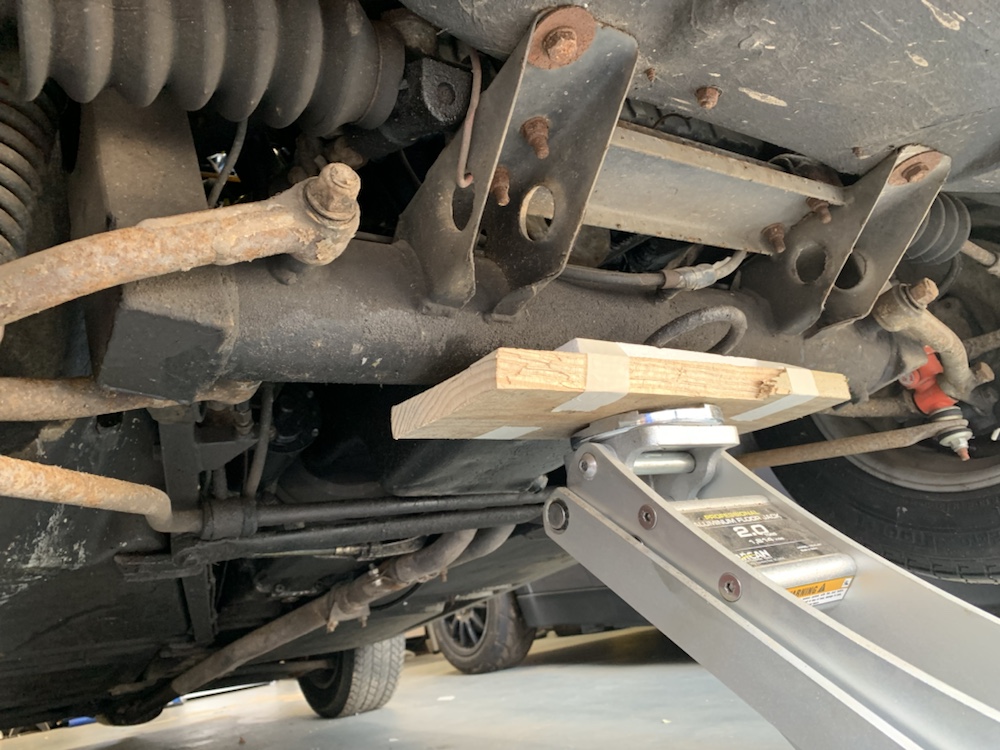 The chassis itself is in good condition, only light corrosion evident, as would be expected. Although I know it’s been upgraded to a Spyder item, I don’t know how old said chassis is. 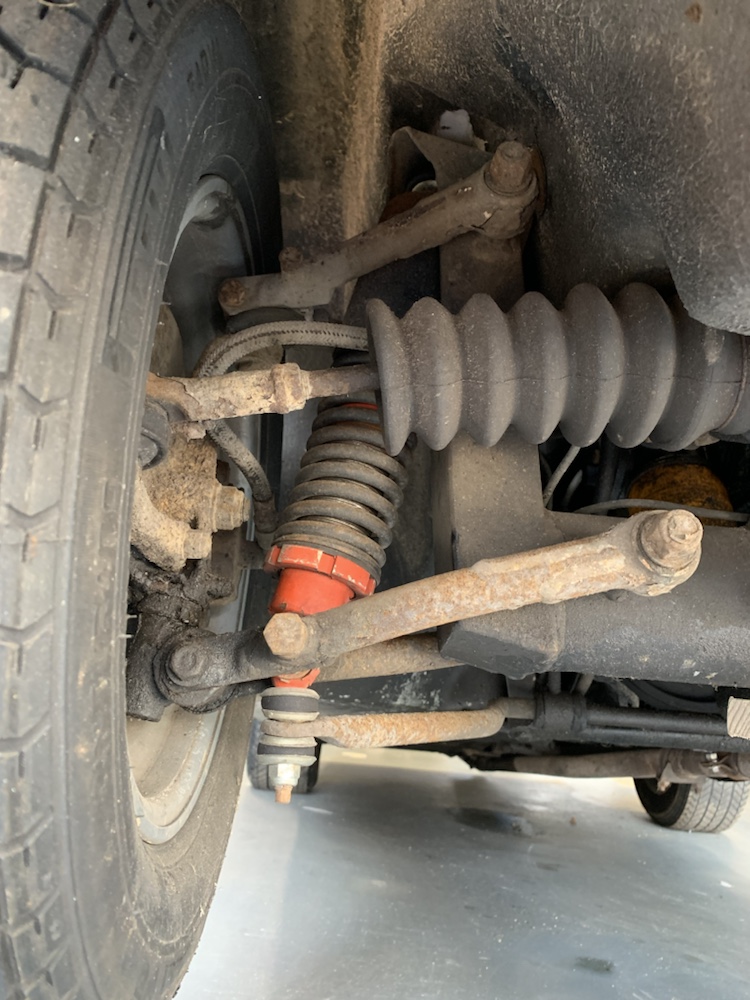 Front suspension arms are in decent condition, again, not standard items. The flakey chromed finish is on tube steel, which is not what the Elan came with, the original Lotus items were formed from welded steel plate. These appear to be upgraded Spyder items.

The front dampers are Avo coilovers, can’t remember the year, but I’m relatively certain my father commissioned these in the mid 90s along with replacement damping adjustable inserts on the rear. 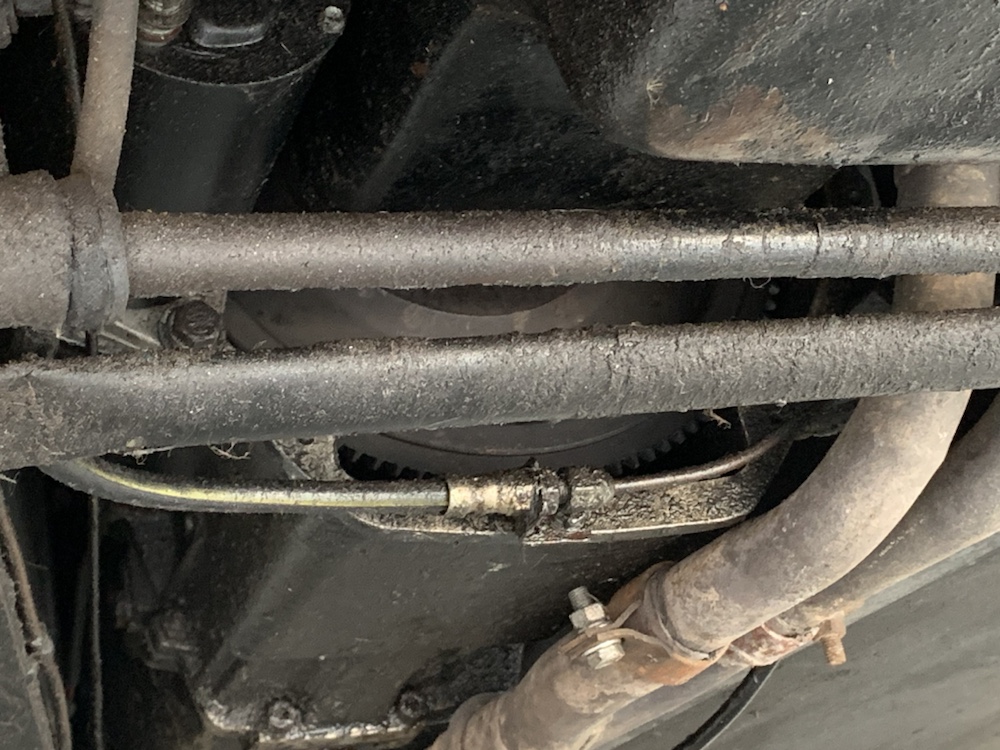 Evidence further back along the car of a leak coming from the crank seal, light haze of oil over the chassis brace and leading up to the bell-housing. More about that very open bell-housing at a later date.

Timeline wise, at this point we’ve reached the start of May-2020.

So giving the car a barnfind style wash down isn’t a restoration, next came some actual tool work to start looking in to the car’s issues and check for other problems, as yet unknown.

The whole reason the car was parked up was ultimately the overheating. Having just spent a decent wedge having work done on the engine to cure an overheating issue, also a rebuild of the driver’s electric window, my father took the car for a drive on a sunny summer day, mid 2001.

When it got to being a bit longer than expected, my mother and I weren’t that surprised when an AA flatbed trundled up the street. The electric window had jammed down, after being opened to let the extra heat out, the extra heat coming from running the blowers full chat to try and add cooling to an overheating engine.

Many 4 letter words were thrown at the car, it was allowed to cool in the street, then driven in to the garage where it was left to think about just what it had done.

Hence my priority number 1, was to try and check the overall health of the engine. Pulling the radiator cap, I wasn’t entirely surprised to find it was not full to the brim. Some crystallising and residue left in it wasn’t that much of a surprise. When I removed the top hose and plugged the radiator boss and the thermostat boss with rubber gloves, I discovered there was still coolant in the system though.

For a long time I have felt the cooling system has a glaring issue on the car and in other engine bay shots I’ve found online and on local racecars I’ve managed to have a nosey round, they have taken steps to address or mitigate this. The system inherently wants an air pocket.

Next up was checking the plugs, to get an idea how the car had been running in general. Each plug was pulled, numbered and inspected in turn.

Overall, actually not too bad, although Cylinder #3 appears to have been running richer than the others.

Last check was the oil, to check for any signs of emulsion suggested a breach in the headgasket.

Whilst obviously in need of an oil change, no signs of emulsion or water/coolant present. As a side note, how brilliant are old dipsticks?!

Perhaps it’s the geek in me, but some of the period stuff on the car I just find so cool.

Remember the days before all this 01… phone number nonsense…? 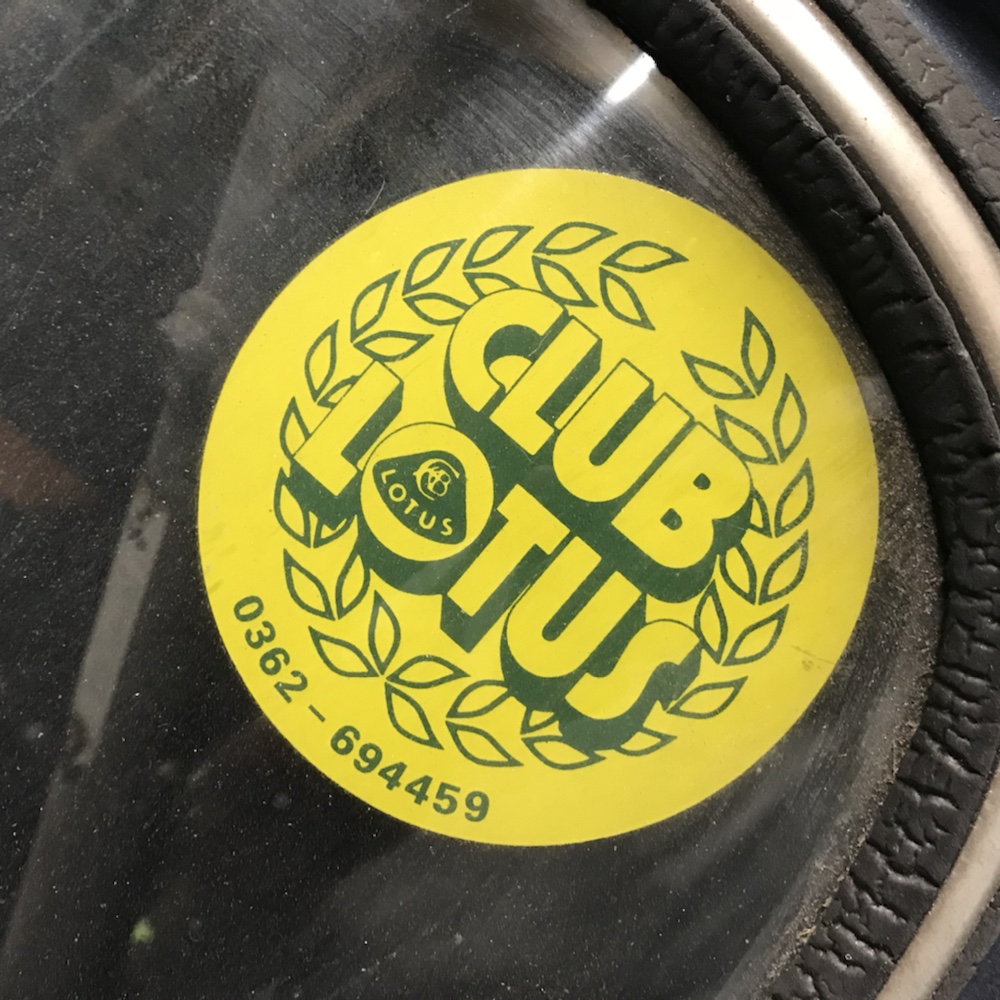 Conveniently this also shows just how gubbed the window seals are! 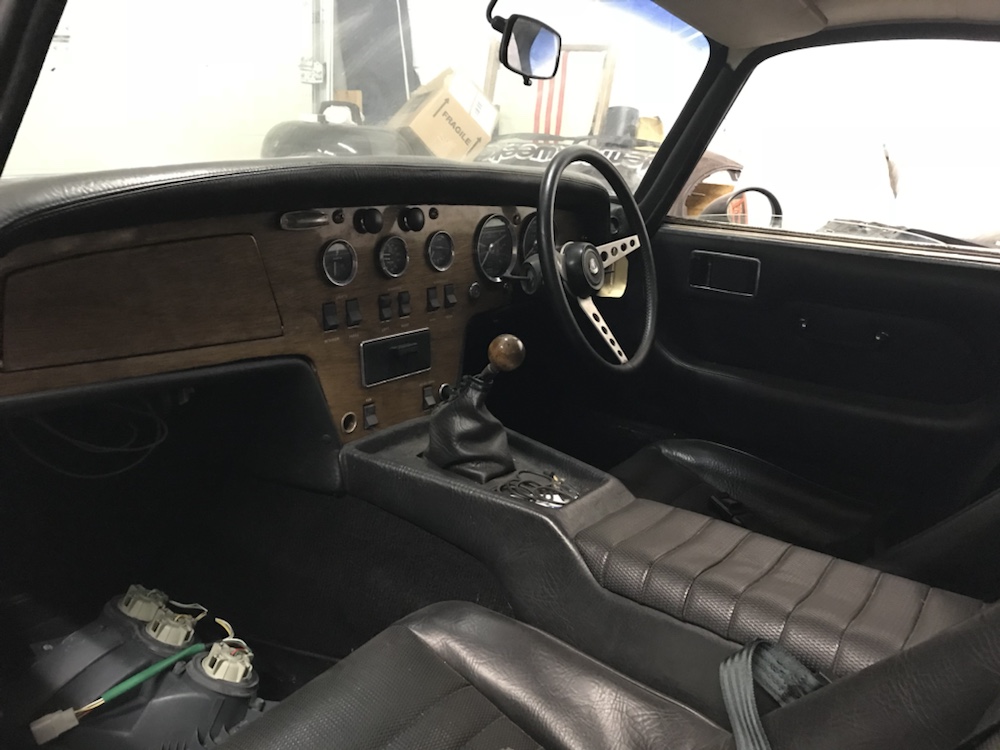 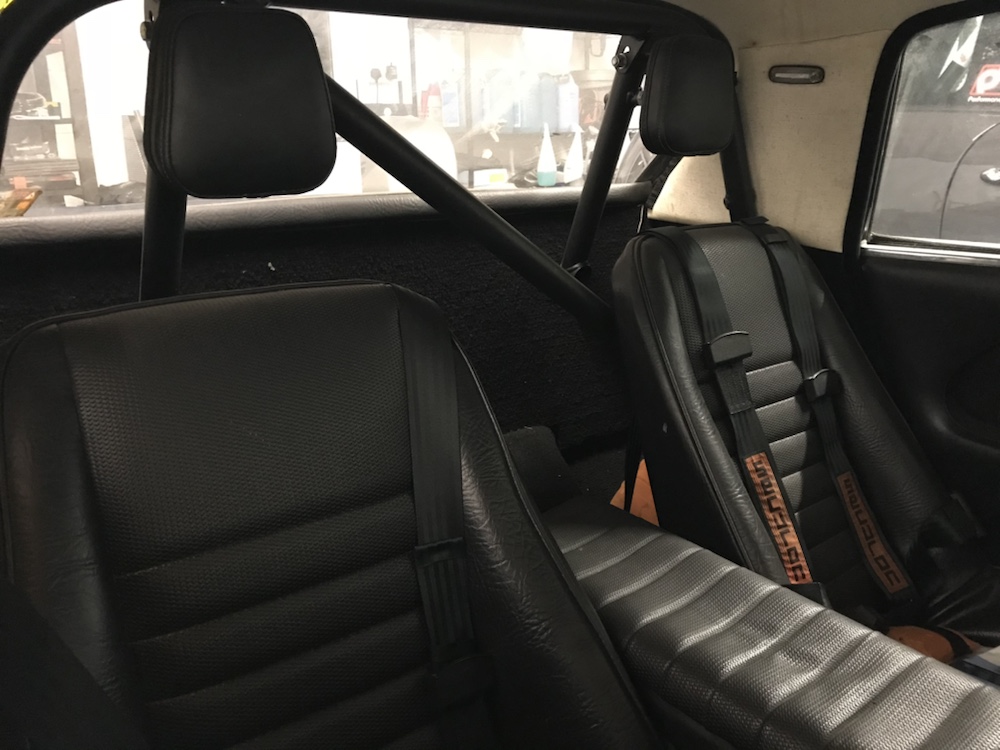 Inside escaped the majority of the dust, despite the electric window being jammed down on the driver’s side the entire time it was parked up. It also smells fantastic, genuinely, not sarcasm. Real leather, fake leather, vinyl, fibreglass, wood, oil, just brilliant! 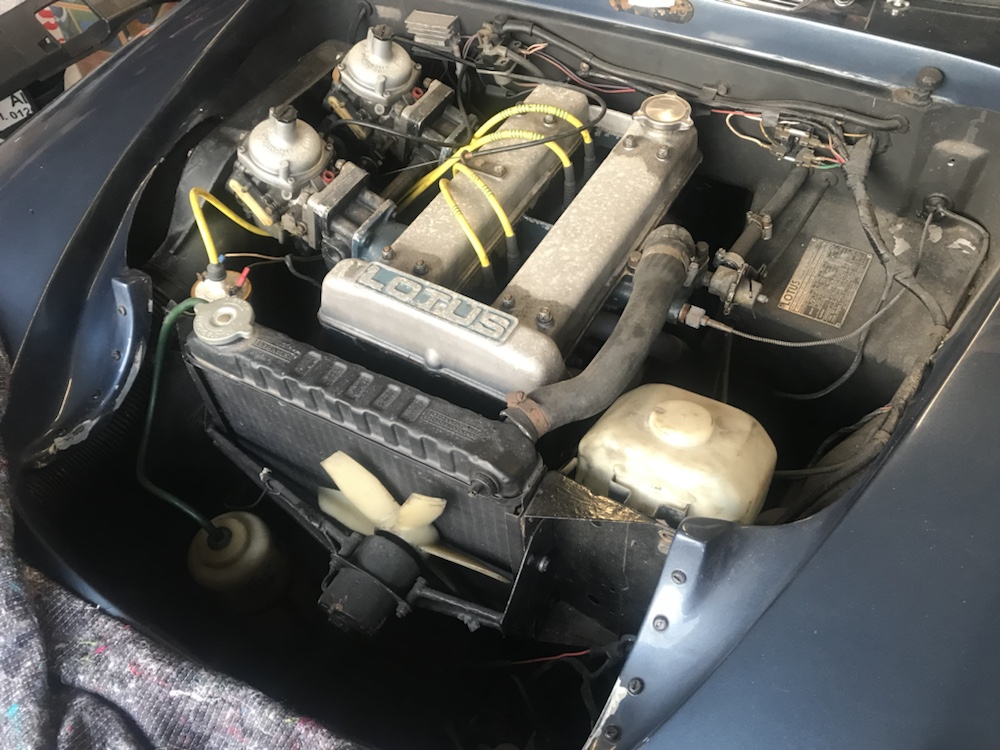 Interesting engine bay this, I don’t think it’s quite right. The radiator set up looks like the one from the Plus2 130S variant rather than an S4 but I can’t be sure. An awful lot of Elan engine bay shots have uprated or altered cooling systems, with good reason, it was an overheating incident which saw ours parked up in the bad books.

It is a Stromberg carburettor equipped car, which means it’s not got as much power potential as it’s Weber clad brethren, but by all accounts, it’s the more streetable engine and that’s ultimately what the car will used for. Despite the (half)cage, there aren’t any motorsport aspirations for her.

Start at the beginning…

Going back some way, like all the way back to the end of 2018(!), the Elan came to live in my garage with the aim being to get it back on the road.

Initially the plan had been to get it back on the road earlier in 2018 to be used as my wedding car, but it quickly became apparent the car was in need of more than a quick going over and some air in the tyres. 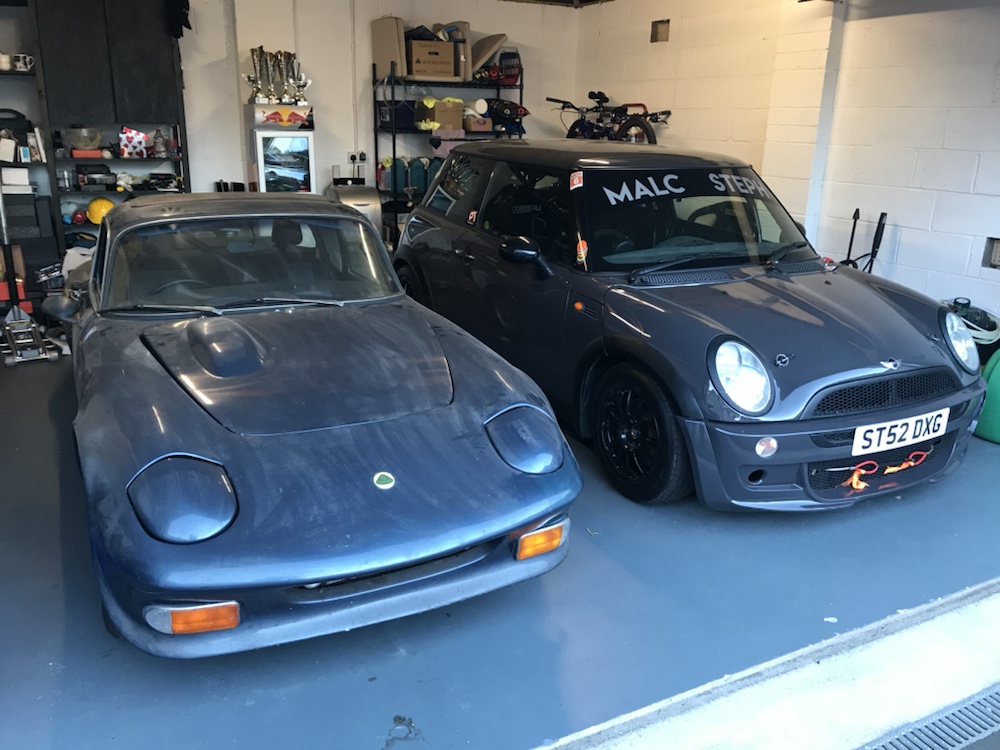 It was parked up in 2001, but all that time in a nice dry garage. Still the brake and clutch systems were goosed, it had overheated prior to being parked up so the engine would need checked and there was a bit of a leak present around the diff.

Anyways, more detail on the car and pictures of the modifications and it’s general condition.

Vacuumed with the soft brush attachment on good old Henry, then quick detailer and multiple micro fibre cloths were used. 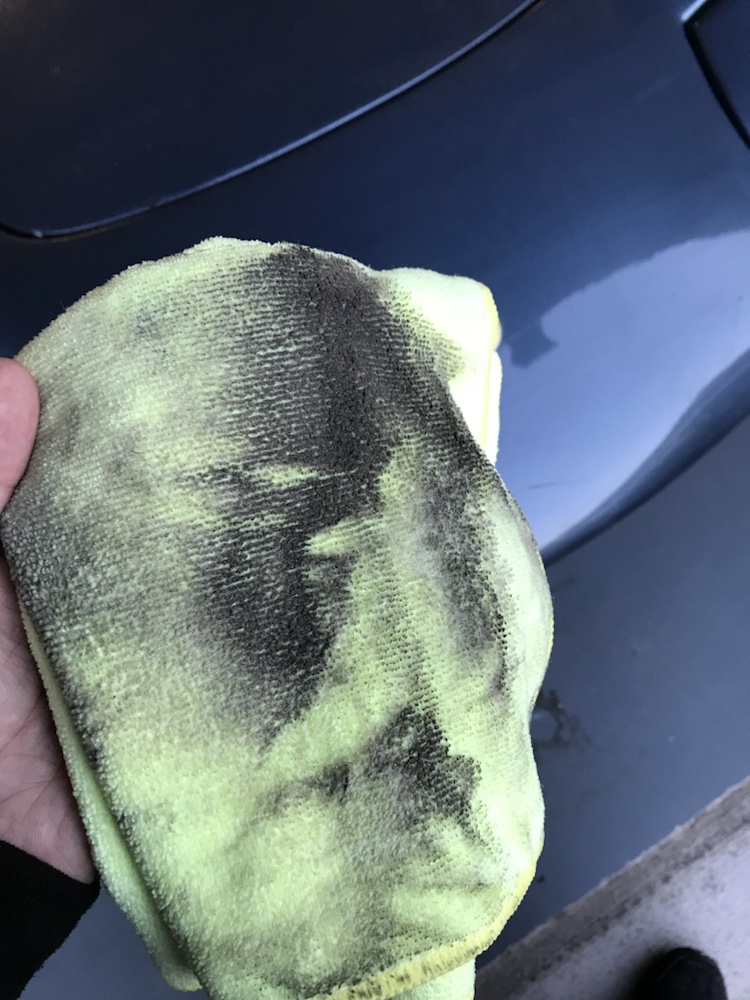 Just a light coating of dust! 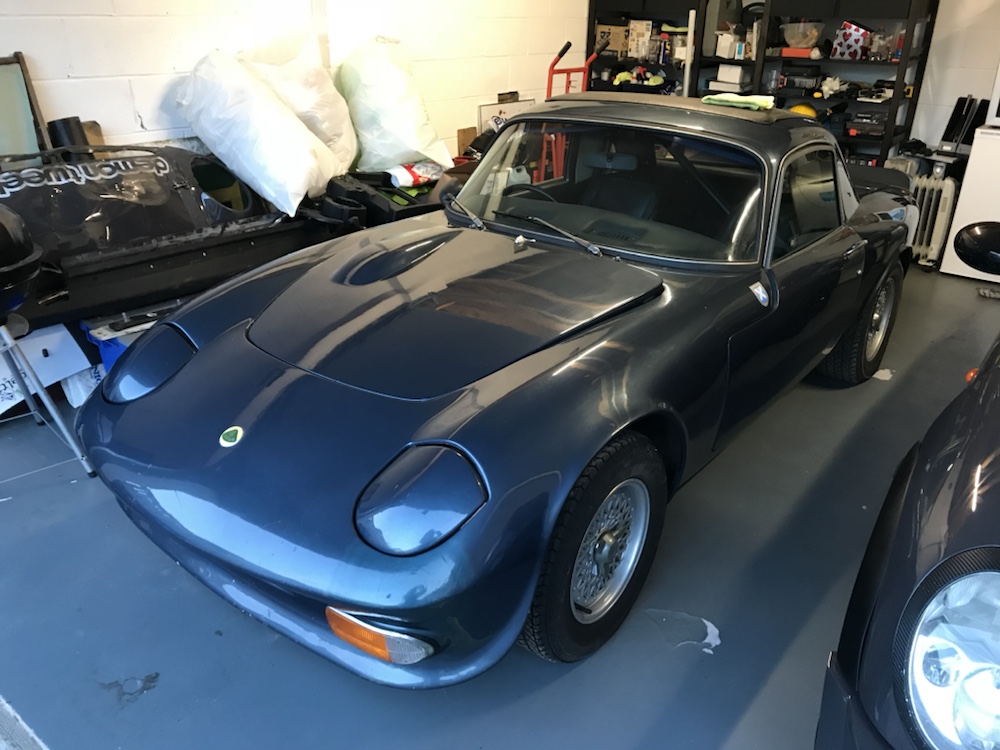 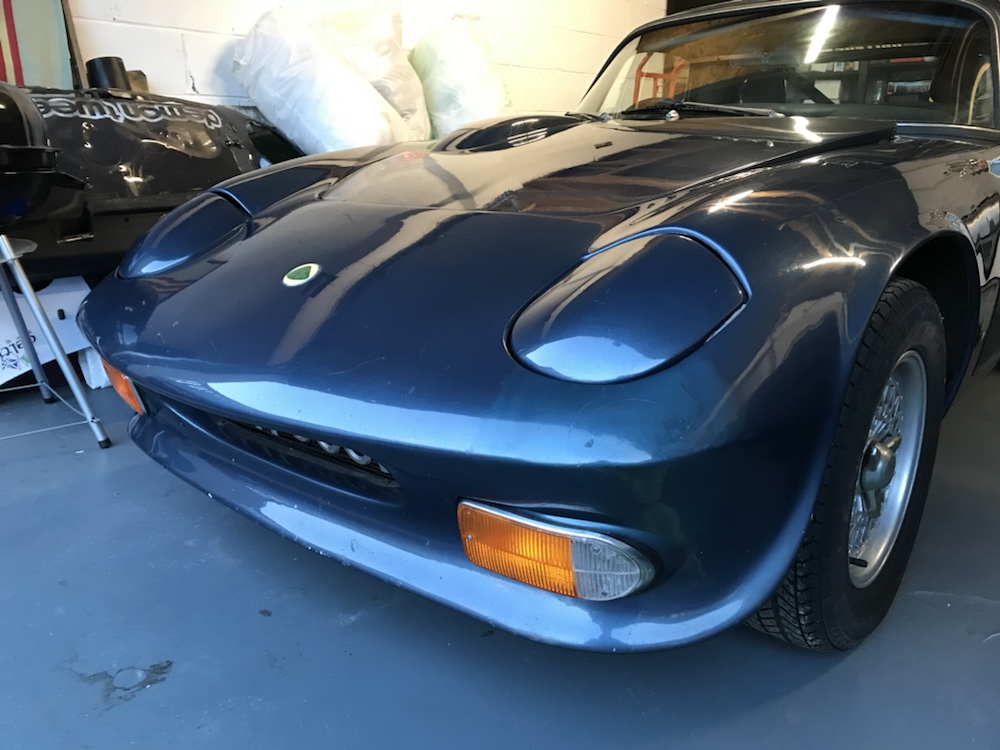 Evidence of a really poor repair on the passenger front corner of the car. This must have happened some time after the car was painted by Vegantune as the colour match is miles off and the cracking and crazing suggests there’s a power of catty underneath. 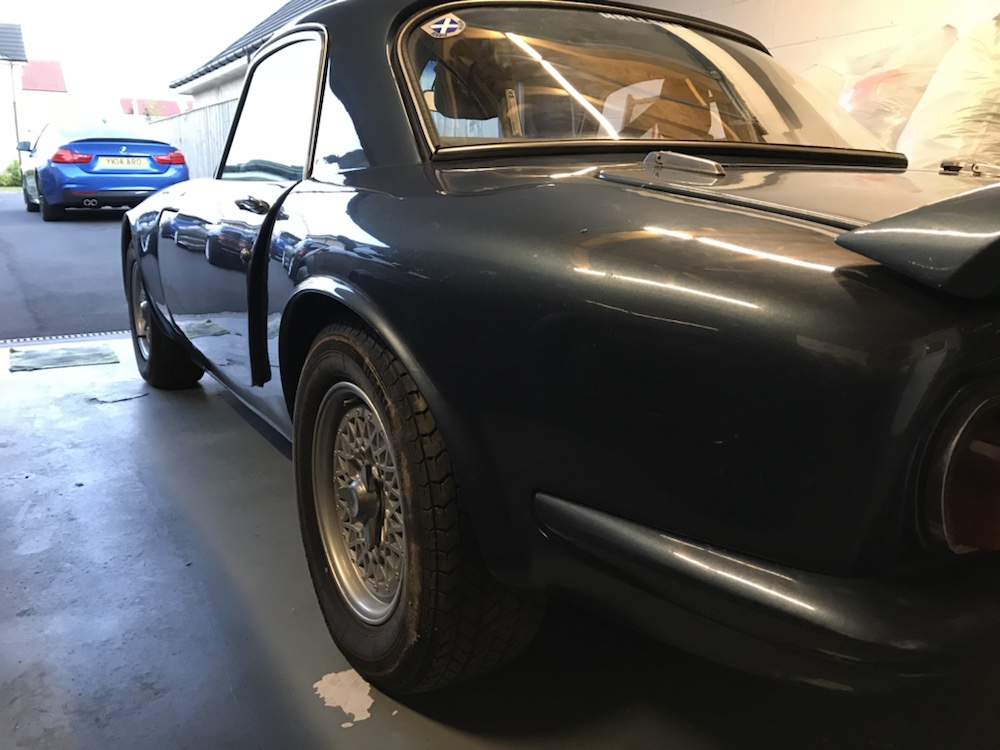 This gives a good indication of just how much wider the arches are compared to standard. The 3 piece Compomotive split rims in 13×7 do a good job of filled them, 205 section tyres are huge when you consider the size and weight of the vehicle.

Also shows just how bad the door fitment is. Not unique to this car, bit of an Elan special feature.

Pretty sizeable ducktail / spoiler grafted in to the boot lid. Not sure what it’s made up of, but the boot lid is seriously weighty for a fibreglass panel! 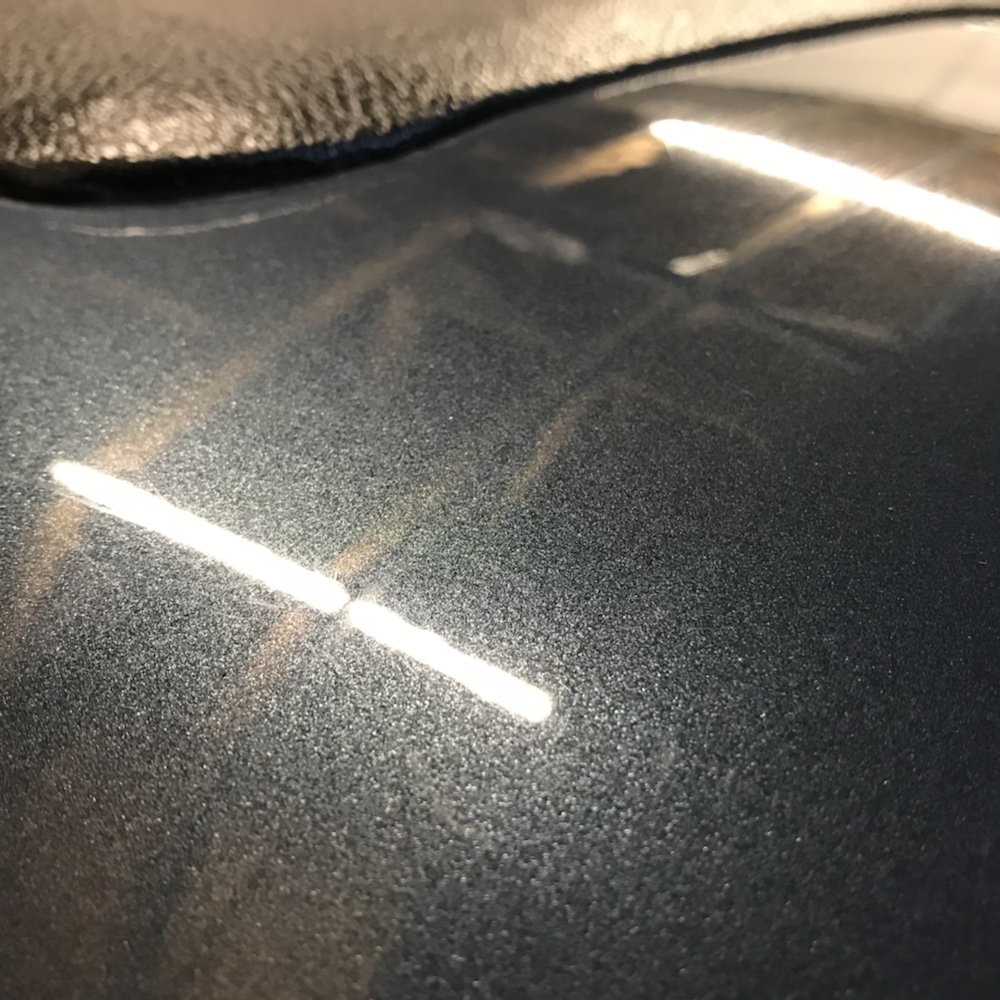 The somewhat unique paint looks to be an attempt at Ecurie Ecosse blue. This shot really shows just how fantastically metallic the finish is.

Sadly the paint is in pretty bad condition, aside from the front end repair. The bootlid is actually a different shade of blue to the rest of the car, there’s parts where you can see brush strokes and paint runs on it also. There’s also sections on the front and rear arches where there are bubbles under the paint which suggests moisture has compromised the gel coat.

Also in that picture is the edge of the Webasto sunroof. Very rare to see one fitted to the “baby Elan” rather than the more common fitting to the larger, and much flatter roofed, Plus2.

When trying to figure out just when the car moved back to mine I found this somewhat cringeworthy video I made doing a walk around. We’ll just ignore the bit where I state the wrong model and wrong year, this was just the start of the learning curve!